Tayler and Green’s preference for terraces over more conventional semis was partly due to their impact in the landscape. Tayler had come to believe that semis looked wrong in a rural context – like ‘a row of pointed teeth, with alternate teeth extracted’. In the same 1955 article* Tayler explains that designing in a rural context is so difficult…

..because of the great size of the landscape itself compared to the size of the housing in it, a problem of scale never found in urban housing. The latter you do not see from very far off except over the rooftops, and you generally see it from nearby in relation to other architecture…Not so in rural housing which is seen for miles around – a tiny drop in a big bucket…In the town the designer has the opportunity of painting a new picture in a limited frame; in the country the picture is already there, a well-loved antique masterpiece, and to add to it is the peculiar problem of rural housing.

If the terrace avoided the ‘gap-tooth’ problem, as Tayler saw, it also threatened a certain visual monotony if not handled carefully. Fifty years before, Parker and Unwin had suggested stepping the building-line in plan, with projecting bays and the occasional street-facing gable, to avoid the severe one-point perspective of the Victorian terraced street. In the rural context it is the view of a group of buildings across a field, rather than along a street, which is perhaps the greater concern. The 1944 Housing Manual contained a diagram suggesting breaks at the party walls along a terrace to allow it to follow a slope; Tayler and Green adopted this suggestion in their earliest terraced projects, and developed it further. On a number of sites they were able to use stepped ridge lines and the mix of unit-sizes at their disposal to accentuate the natural topography of site, which in Norfolk can be very subtle. Woodyard Square in Woodton is the best example, where the largest house is positioned at the very top of a rather modest rise. 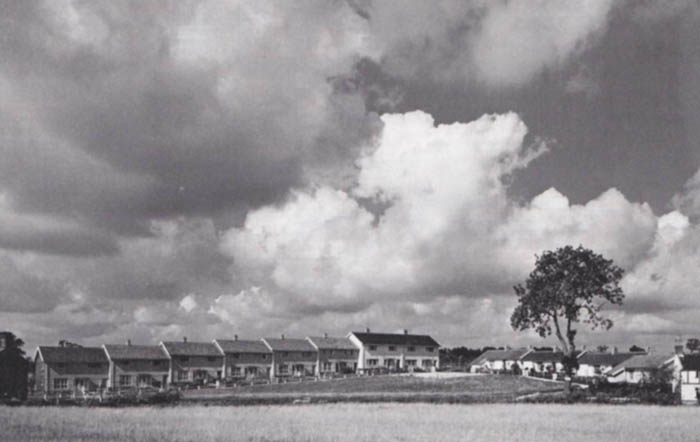 An opportunity to develop their ideas at a larger scale came in the form of a planned Loddon ‘New Town’ on land between George Lane and Kittens Lane. Tayler and Green used their preference for clear front-and-back demarcation to create a series of deformed perimeter-blocks with buildings on all four sides, such that no garden was ever left exposed. Herbert Tayler was scathing of the more fashionable approaches to site planning, such as those based on solar orientation favoured by the European modernists (see previous posts), or so-called ‘Radburn’ planning which separated pedestrians and vehicles:

I do not know which is ‘front’ and which is ‘back’ and obviously the visitors and callers will not know either. Naturally Dad’s bike and the coal lorry will come by road…but the vicar and that stuck-up Mrs So-and-So will surprise one in the rear via the Radburn Green.

And though the plans for Loddon New town still use longish runs of terrace, Tayler and Green generally avoided these after Windmill Green – partly because of their client’s concerns that they looked a bit barrack-like, but also as a pragmatic response to the way in which briefs for individual sites emerged. For example, three bungalows were added at the approach to Windmill Green in 1958 and two more in 1965. According to Tayler:

Small as the housing groups are, they have been added to several times and cannot even now be said to be finished. We soon learned not to plan rigidly or ahead of requirments…No use to dream of sweeping Royal Crescents, when the next contract might consist of adding two bungalows.

This mixture of thoughtfulness and pragmatism are a hallmark of Tayler and Green’s planning, and ensured an appealing picturesque quality in almost all their projects. 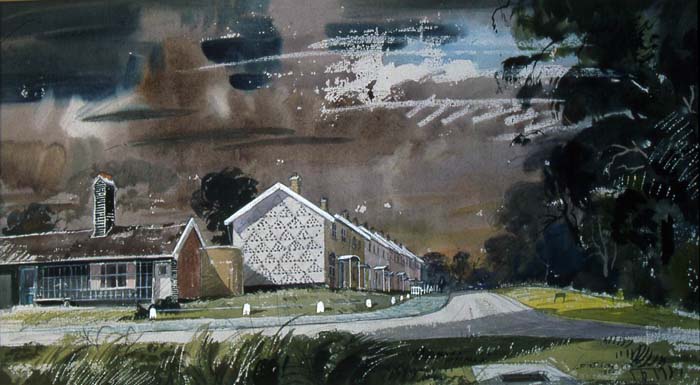 Next post: ‘Tayler and Green #10 – Refusing to Indulge the Un-Homely‘

*‘Landscape in Rural Housing’ Housing Centre Review No.3 1955 – reprinted in Harwood and Powers’ book ‘Tayler and Green Architects: The Spirit of Place in Modern Housing’