Black buildings are a common site in the Norfolk countryside. Most often this involves black-painted weatherboarding on a timber-framed barn or more lowly shed, and sometimes it’s black-painted brick (see last post). Black tar-based paints were used widely used during the nineteenth century, as their main ingredient – coal-tar – was a waste-product of the production of ‘town gas’ from coal. A black painted plinth on a brick or rendered building is a common sight, used to protect the lower part of the wall from splashing, but it is also not uncommon to see a single wall of brick coated full height, presumably to protect it from penetrating damp, perhaps on the side of the building facing the prevailing wind and driving rain, or sometimes on the tall relatively exposed gable wall, not benefitting from the protection of an overhanging eave.

The promised link to Tibby’s Triangle in the previous post comes in the form of a number of black-painted brick walls in the project – presumably ‘quoting’ the use of tar paint in the local vernacular. They’re not the first. One thinks immediately of two RIBA Manser Medal-winning houses in the region – The Black House by Mole architects and Acme Architects’ Hunsett Mill (which I talked about in an earlier post) – though neither of these actually uses paint. Both prefer something more substantial: corrugated Eternit sheeting and charred timber respectively. I have to say some of my colleagues found the painted brick at Tibby’s triangle rather ‘un-architectural’, especially where two colours meet at a corner. I rather liked its matter-of-factness.

The rest of the project is in a quite unusual buff brick, pointed flush with a rather limey looking mortar, quite a lot of which is then painted white. The roofs are pan-tiled and the rainwater goods are in mill-finished aluminium. White painted windows with contrasting natural timber casements, some popping slightly forward of the wall, give a very modern twist.

I don’t have lots more to say here about Tibby’s Triangle, other than that I like it very much. It’s clearly a very urban project, and really beyond the immediate scope of Ruralise – but wouldn’t it be great if Hopkins Homes could do more like this, setting a very high standard for other house-builders in the region. 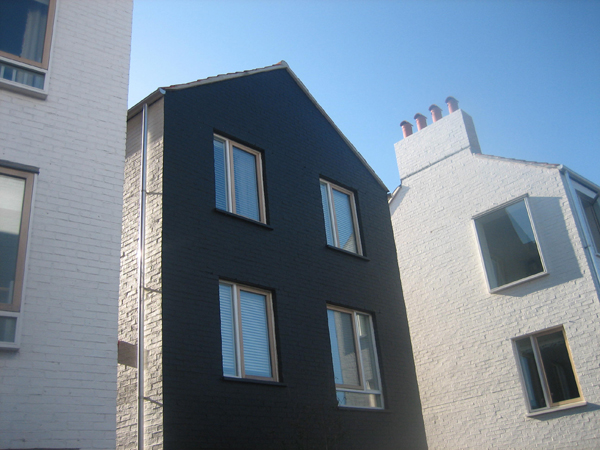 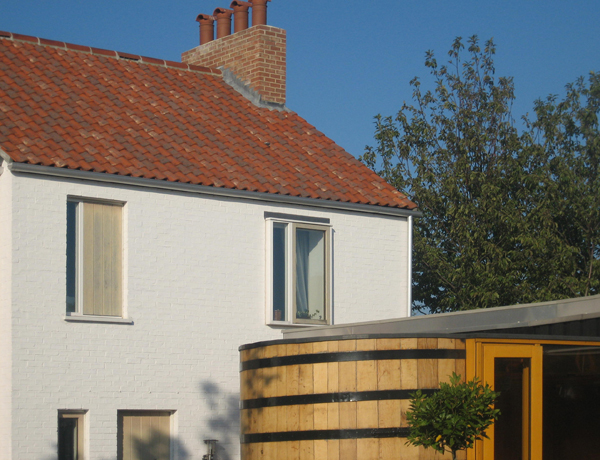