In an announcement from the CLG last week, Grant Shapps declared his support for the self-build sector, saying he wants to ‘break down the barriers that many aspiring self-builders often come up against’. The Community Right to Build (CRTB), he says, ‘will offer communities the chance to give the green light to new developments without the need for specific planning applications’. I guess we are all guilty of seeing everything through the prism of our current interests (not least me, here at Ruralise!), and while I’m all for self-build, I can’t see the CRTB making a huge difference to the sector.

The announcement notes that self-build accounts for 20% or UK housing output, the lowest in Europe, but still a sizeable 10,000 units. I tried, and failed, I’m afraid, to find out how many of those are individual self-builders, and how many are in larger groups, because the distinction might be important, I think.

I can’t imagine that a single self-build plot, or even a group of two or three, could create the sort of ‘up-side’ that will be necessary to ‘sell’ a CRTB project to the community in which it sits, as I’ve described previously. Larger projects – ten, fifteen, twenty homes – would have more potential and generate more cash (see my worked example), but I don’t know how much demand there would is for that type of self-build. And how likely it would be to find a group of ten or twenty families in a single village with the local connections and expertise to pull it off through CRTB, one can only guess.

Still, unlike all the cynics and ‘nay-sayers’ who dismiss the localism agenda in general and the CRTB in particular, I sincerely hope I’m proved wrong.

Below: Ashley Vale, Bristol. 20 self-build homes on a former scaffolder’s yard. Worthy of support, surely, but how typical of the sector is it? 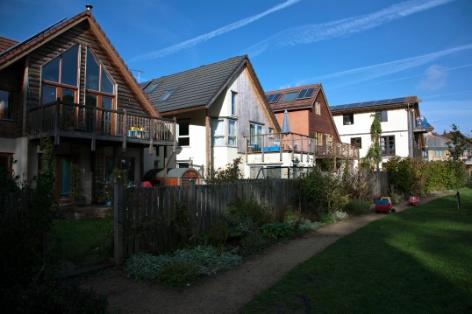