A rare sortie abroad in the last couple of weeks has reminded me that despite the great cost of holidaying overseas (in cash and carbon), it does give one the opportunity to see new things and have time to think about them. We spent a week at Celle dei Puccini, a tiny village in the Alpi Apaune north of Lucca, and I got to thinking about what on earth a village was doing there in the first place, half way up a mountain (a mountain by Norfolk standards at least), why it had apparently at some stage ‘died’, and what might bring it back to life.

The landscape reminded me of the steep wooded valleys of the approach to the Highlands from central Scotland, but in Scotland the rugged slopes above the valley floor appear more-or-less uninhabited. Around Celle the steep hillsides are dotted with fully-formed villages. It takes 20 minutes to drive the 4km and climb 300m from Diecimo on the main Serchio river valley up to Celle, and it’s a further 100m climb to the neighbouring village, Gello, at the head of the valley. As we snaked up the hair-pin roads I imagined making this trip in a time before the motor-car – on foot, by mule or horse and cart – to get to the nearest market. These villages are seriously remote; what are they doing here? 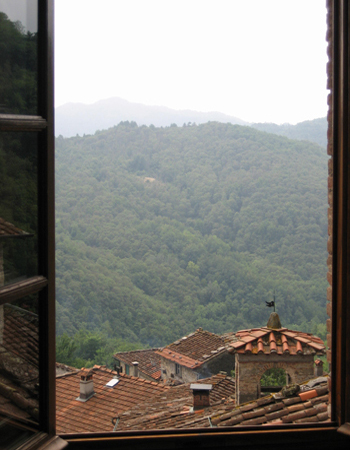 The answer is obvious of course: like Scotland, there is plenty of forestry going on here – the main valley leading out towards Lucca is dotted with paper mills – but unlike Scotland a warm moist climate has built up fertile soils on these precipitous slopes. Around each village the dense woodland gives way to terraced fields of vines and olive trees, and it is clear from Celle’s remaining (very well-tended) gardens that small-scale horticulture (especially the ubiquitous tomatoes) and livestock-keeping made it possible to eke out a living. No doubt surplus wine, olive oil and perhaps game were traded for flour from the plains around Lucca, or from Lombardy to the north.

I can only imagine (until someone can point me at some suitable further reading) that a familiar combination of scaled-up agriculture and easier livings to be made in nearby industrialising cities during the C19th and early C20th put paid to this near-subsistence (but highly sustainable) rural economy. Certainly by the time our hosts in Celle bought the first of their five rental properties in the village, twelve years ago, they were all long-since derelict – and they say that a fair number of the thirty or so houses in the village are still empty. The owners of our holiday-home have re-planted the olive trees on the land that came with one of their purchases, but most of the vine-yards above the village, on the rocky path up toward Gello, are derelict. And the wine that is still produced locally is available so cheaply at the local produce cash-and-carry that our hosts often give it away for free to their visitors…which, at the risk of sounding ungrateful, seems wrong.

Although the village isn’t exactly bustling today, its decline seems to have at least halted. The five rentals aren’t a solution in themselves – there is no shop and only a single restaurant in the village to capture the potential ‘spend’ that they generate – but they have been a fillip, no doubt. And everyone is happy that this year, for the first time in more years than anyone cares to remember, there are two young families with babies in the village. I can only hope Celle’s renaissance continues.