All Community Right to Build projects will take place in the context of an existing village, and its promoters will no doubt want to add to their village in a sympathetic and sensitive manner. So what might a contemporary ‘village architecture’ be like?

We all have an image of a village in our mind and it’s one that the house-builders have played on very successfully over the years. House-builders know what we want in a new home, apparently: brick-built, two or more parking spaces, a garden. And judging by the vast majority of house-builders’ output, a ‘village-y’ look is essential: pitched roofs, white ‘sash’ windows, dormers, chimneys, finials on decorative barge-boards, the occasional Georgian-style porch. Detached houses are enduringly popular; apparently we pay on average £344,000 for the privilege of not being attached to our neighbours, whereas semi-detached houses, terraced houses and flats are typically under £200,000.

So house-builders think they know what consumers want (detached, pastiche Victoriana), but they can only deliver this ‘product’ through the constraints of the planning system. Most significant of these constraints is the stipulation that the favoured large-scale developments should be planned with net average housing densities of at least 30 dwellings per hectare (dpha), for reasons described in a previous post. Before ‘Towards an Urban Renaissance’ made its mark, house-builders typically built at 15-20dpha, and most real villages are much lower densities I’m happy to report that many house-builders are looking to diversify their product ranges – Abel Homes in Norfolk, for example (more later) – but the vast majority of new housing estates are still being conceived as large swathes of pastiche Victorian houses laid out at 30dpha. 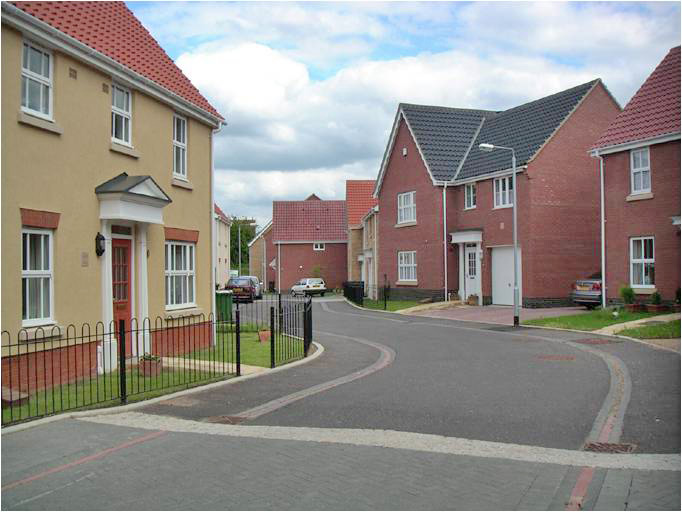 If a high proportion of these are detached, and the local Highways Department gets its way (wiggly roads to reduce traffic speeds) we get the now too-familiar large, cramped and confusing estates, with its tiny gardens, haphazard streetscape and awkward parking arrangements.

Read more about house-builders’ image of a village here.