While writing the recent posts on local building materials, I was thinking about an estate in Wymondham called Whispering Oaks. The development is set at the very northern tip of the town, over a mile from the town centre and separated from it by 1930s and 50s ribbon-development along the old Norwich Road, and the Ashley Estate, a vast swathe of suburb laid out during the 1960s and 70s. This post-war development is the real context for Whispering Oaks, but the design-guide that supported its outline consent and subsequently informed its detailed design was dominated by pictures of Wymondham’s mediaeval town centre and also, inexplicably, the centre of the picturesque village of Hingham, over five miles away.

I recall that what really jarred when I read it was that weather-boarding was included in the proposed palette of materials and, as we have seen, it’s really not part of the vernacular in south-Norfolk. More common in Suffolk and Essex, weatherboarding in south-Norfolk is confined to the occasional barn or cart-shed (black) and a handful of water-mills (white). The design guide for Whispering Oaks, it seems to me, was a house-builder ticking the ‘local-distinctiveness box’, either cynically or incompetently – and in either case being allowed to do so by the planning system. 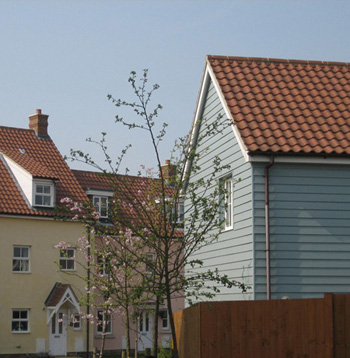 Yesterday I cycled up to Whispering Oaks to take some snaps of the offending weather-boarding. I was disappointed. Somewhere between outline consent and implementation most of it had been purged. A handful of houses were clad in fibre-cement ‘weatherboarding’, a couple in white and a few more in a powder-blue. And here’s the thing: it wasn’t at all out of place. This development, its design predicated on ‘local distinctiveness’, was in fact so unlike the mediaeval town-centre of Wymondham that erroneous weatherboarding seemed perfectly acceptable. In fact it definitely gave a visual lift to the corners of the streetscape it occupied. Short on brick, long on render in a palette of pastel hues, lit up in the spring sunshine and framed by cherry blossom, Whispering Oaks was vaguely reminiscent of Seaside in Florida, or perhaps Portmeirion, than a South Norfolk village.

But only vaguely! Maybe its designers would have done better in picking one of these as their reference and pursuing it with conviction, and maybe it wouldn’t have really mattered. Whispering Oaks is all but invisible from the surrounding countryside and main roads. Planned to ‘sustainable’ PPG3-densities (30+ dwellings per hectare) many of the houses have three-storeys, and the roads wiggle crazily through the site to provide ‘traffic calming’ without the universally hated speed-bumps. This development would be hard pushed to be less like Wymondham town-centre, even if populated by the most slavish reproductions of its mediaeval and Victorian buildings. Actually, Matthew Rice puts it neatly in ‘Building Norfolk’ (see last post), noting that in one modern development on the outskirts of Holt…

No doubt Rice’s solution would be to build fake-old houses at appropriately low densities, but if one accepts the sustainability-imperative behind building large-scale, relatively dense new settlements (outlined in previous posts) you have to ask whether a mediaeval town centre or picturesque rural village is really a valid starting point for designing a large new housing development. To be clear, I think there is a big difference between how one might reasonably approach the design of a small group of new homes on the edge of a village on the one hand, and a new estate of a hundred or a thousand new homes on the other. The small group of houses will read as part of a landscape or existing streetscape, and a contextual approach (contemporary in preference to pastiche, in my view) would seem appropriate; the large new estate is a new ‘place’ in its own right, and could quite reasonably be anything it wants to be. In this context, the concept of ‘local distinctiveness’ is, I suggest, more complex than it first seems.