Coming back to the issue of special and normal buildings (as I did in the last post), put me in mind of a house which I drive past occasionally on my way up to Holkham Hall, where Lucas Hickman Smith have a couple of projects at the moment. In some senses it’s a very ‘normal’ house – two storeys, perhaps three bedrooms, a pitched roof – but there’s something about it I find quite arresting in the context of Ruralise.

It’s built entirely from traditional local materials – flint, brick, pan-tiles, white-painted timber – and each material is handled in an entirely ‘normal’ way. The flint is framed at the corners and window openings by brick, in a traditional (very buildable) manner, and the detailing of the roof – ridge, eaves, verge – is all completely normal (read ‘cost-effective’)…and yet there’s no mistaking this is a modern house. 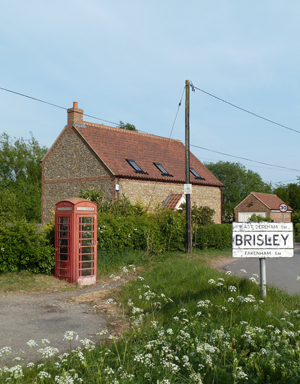 The roof form is interesting: it’s asymmetric, with the eaves set much lower at the front than the rear. In an earlier post I described how one-room-deep, wide-fronted houses have often been extended to by adding one or more rooms to the rear. Simply extending the rear roof-plane down over the extension is quite a common solution, leaving a house with two storeys at the front, one storey to the rear and an asymmetric roof. I’m not sure this house is making a nod to this historical precedent; it’s not making many other nostalgic references. I suspect the lowered eaves to the street may simply be to reduce the house’s scale next to the neighbouring bungalow – this decision may even have been driven by the planners. Either way, it leaves the house with one and a half storeys facing the street, nicely reducing its scale and emphasising the size of the roof. (If you’re a regular reader you’ll know why I think this is interesting; read more about ‘Roofs Across Fields’ here).

There are lots of one-and-a-half-storey cottages in Norfolk, and in the past the only way to get light into an attic room was through a small gable-widow, or dormer windows in the roof. On many older cottages the dormer is square, roofed simply by a plane of tiles sloping rather less steeply that the main roof, but gabled dormers are also very common – and have become the weapon of choice for a house-builder wanting a ‘cottagey’ feel on a new house. Our house in Brisley uses roof-lights instead of dormers, a very practical solution, which gives a much more modern feel, enhanced by the large area rather ‘abstract’ area of blank wall below the eaves. Put dormers on this house and it would leap across the line that separates the architecturally intriguing from the banal.

There are a number of things I would tweak on this house (I find the porch rather intrusive and the rooflights aren’t the most elegant available), but overall I think it’s a thoughtful addition to the streetscape on the edge of the village. It is architecturally modest without abandoning all architectural ambition; unusually and pleasingly normal.

More on Grant Shapps and ‘normal’ buildings next. 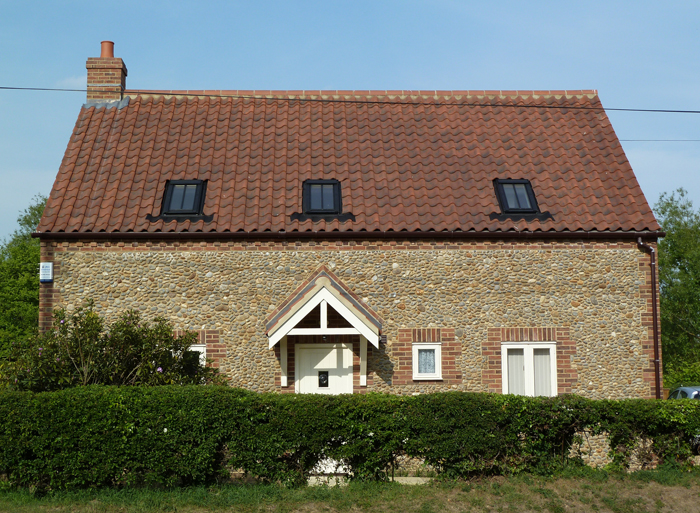 One Response to Contemporary Vernacular?