In a recent post I described how the square-on-plan semi, with front and back living rooms became ‘universal’ during the inter-War period. Private house-builders built three-quarters of the 4 million news homes produced in the period, mostly without the help of architects – so it’s perhaps not surprising that the profession has been so scornful of the ‘suburban semi’ ever since.

Modern architects‘ references for mass housing were high-density and European – the blocks and slabs of apartments envisaged by le Corbusier as ‘machines for living in’. Where they were involved in the design of low-rise, self-contained houses – it was to the efficiency of the narrow-fronted terrace that they gravitated, perhaps with the civility of the Georgian town-house in mind. It seems beyond the scope of Ruralise to chart this in any detail, less still with real authority, but certainly when I was training in the mid- to late-1980s it was perhaps Neave Brown’s Fleet Road and the early phases of housing in Milton Keynes that sprang to mind, rather than Welwyn Garden City (of which I was only dimly aware), and today I see Bill Dunster’s BedZed or the close-packed terraces of Borneo Sporenburg as part of this focus on the narrow-fronted house.

In fact so in-grained was the narrow-fronted terrace as a starting-point for designing houses that it was a real jolt to discover the wide-fronted terraced house used by PRP Architects as the basis for their master-plan for the Rowntree Foundation’s new settlement at Derwenthorpe near York – which I came across as part of the briefing pack for an invited competition back in 2005, or thereabouts. Its virtues were clearly spelled out: more daylight, more space for cars in the street-scape, more space at the rear to extend, and of course the through-lounge with the advantages for solar orientation that the Tudor Walters committee had identified 90 years previously. 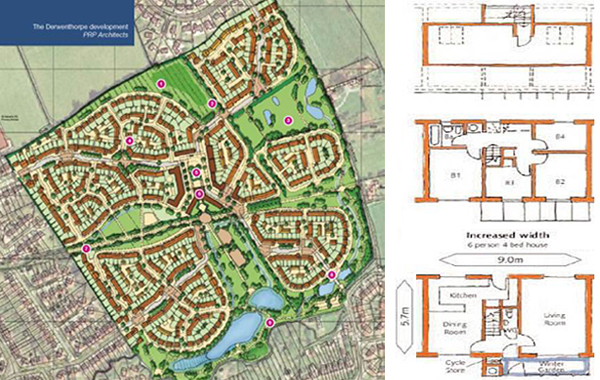 As I have mentioned previously, the format does have some draw-backs – increased ratio of external wall to floor-space and more access-road per unit than a narrow fronted house. Perhaps that explains why the narrow-fronted terrace remained so popular with housing architects during the last boom. In fact, apart from the Derwenthorpe master-plan I’ve seen only the national house-builders exploring the wide-fronted house in recent years – and indeed most of them now have wide-fronted types in their product-ranges. But I suspect they are there more for their pastiche-potential rather than their practical advantages!

Below: Wide-fronted houses by Norfolk Homes in Dereham. Nice hedges… 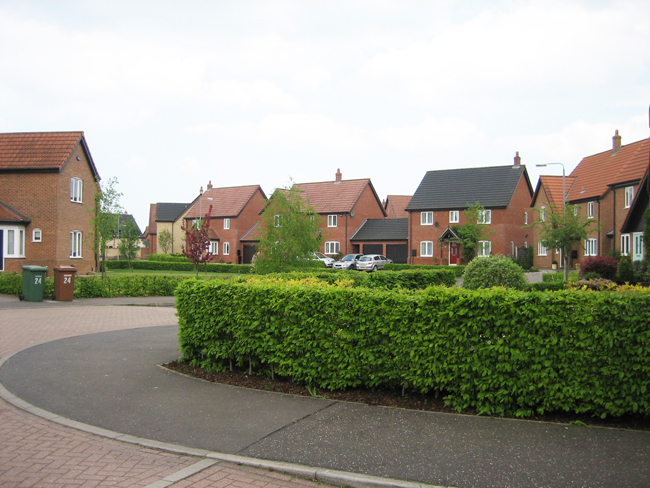