Tayler and Green worked for Loddon throughout the 1960s, but also completed residential projects in the New Towns of Hatfield and Basildon, a large development of three-storey houses and flats at Camp Road in Norwich, and an office building in Great Yarmouth. In 1974 Tayler and Green retired and moved to a house they built for themselves at Altea near Alicante in Spain. The practice was taken over by Graham Ling and Peter Woods, who had worked with Tayler and Green since 1953 and 1955 respectively, and they were subsequently joined by Stuart Offord. The practice was re-named OWL Architects in 1990, and still operates from Battery Lane in Lowestoft.

The quality of Tayler and Green’s work for Loddon was acknowledged in its day by awards and medals from government ministries, the Civic Trust and the RIBA, and was reviewed enthusiastically by a number of critics, including Ian Nairn in 1958 and Sherban Cantacuzino in 1960. But it is perhaps fair to say they were not regarded as part of the mainstream of Modernism, which dominated the architectural profession during the 50s, 60s and into the 70s. Herbert Tayler was certainly aware of this. Writing in 1950 about different strands of the Modern Movement – typified by Walter Gropius on the one hand and Frank Lloyd Wright on the other – Tayler observed:

I doubt whether future generations will classify things so neatly…To them, the stream of our architecture may seem muddy but it will be seen, I think, to be one stream.

The architectural historian Nikolaus Pevsner perhaps saw more distance between Tayler and Green’s work and the Modern Movement than Tayler cared to acknowledge. In his introduction to the Norfolk volumes of his ‘Buildings of England’ he described Tayler and Green’s work as ‘post-modern’ – one of the earliest uses of the phrase. With its geographical isolation, its interest in pattern, colour and domesticity, Tayler and Green’s work eventually came to be regarded as rather marginal in the authorised histories of Modernism…and by the time ‘Po-Mo’ proper took hold in the late 1970’s it was almost forgotten. Almost, but not completely.

During the early 1990s an extended discussion was taking place between English Heritage and the Twentieth Century Society about how to protect the best buildings of the Modern era, and in 1998 the Prince of Wales Institute commissioned Elaine Harwood and Alan Powers, Chair of the C20th Society, to assemble a touring exhibition of Tayler and Green’s work. The supporting publication – Harwood and Power’s book ‘Tayler and Green Architects 1938-1973; The Spirit of Place in Modern Housing’ – remains the definitive work on the subject. In the same year, Windmill Green, Davy Place and several other projects were listed, a recognition bestowed on very few C20th buildings, especially with their architects still alive. (David Green died in 1998, and Herbert Tayler in 2000, at the age of 87).

Thanks to the exhibition and book, interest in Tayler and Green’s work was re-kindled. In 2009 Windmill Green was a Historic Winner in the prestigious national Housing Design Awards, and in 2011 Alan Powers was invited to give a talk about Tayler and Green at the Festival of Architecture for Norwich and Norfolk (FANN-XI). The talk was well-attended by local architects, and also by representatives of South Norfolk Council (into which Loddon RDC was absorbed during local government re-structuring in 1974) and Saffron Housing Trust who eventually took ownership of Loddon’s former housing stock from South Norfolk. Also present was a sizeable general-interest audience, which was clearly aware of Tayler and Green’s work but knew little about it.

Through this series of articles, and the stand alone web-site which will follow, I hope to have made Tayler and Green’s important body of work more easily accessible to the widest possible audience. 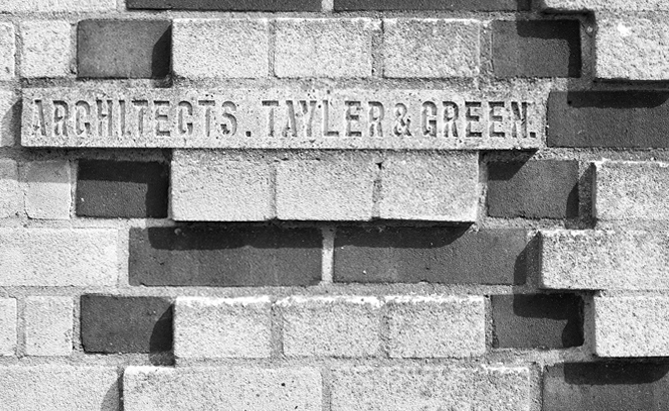