A few pages on from my recent letter in Building Design (BD) was a piece on architect David Kohn’s recently completed project, Stable Acre in Norfolk. The long, low house incorporates the remains of a brick stable-block, but appears almost as a new-build. I was very taken by it, particularly in the context of what I’m talking about here at Ruralise. 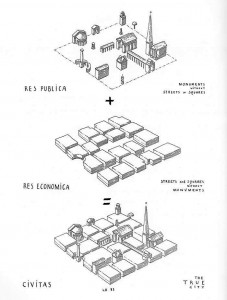 In previous posts I have begun to suggest that a new building’s relationship to the street, its scale, massing and overall form are at least as important as construction materials and ‘vernacular’ details (dormers, barge, boards, finials, etc) in connecting it sympathetically to its village setting. I also observed that these ‘architectural features’ are comparatively rare in true village architecture, that most buildings in a village are rather simple or modest, architecturally speaking. Leon Krier’s seminal diagram (right) puts in visual form what Eldred Evans articulates thus:

‘I think in terms of hierarchy of the city . . . . Not every building has to be important. Very few buildings have to be important in the urban fabric’.

Whilst Stable Acre’s architectural restraint or modesty makes it interesting for Ruralise, it is certainly not everyone’s cup of tea. In his description of it, BD’s Ellis Woodman identifies a ‘strain of asceticism’ running through the building, suggested perhaps by the scale and stark whiteness of the open plan living spaces. In later posts I will talk about 60s-modernist houses by Peter Aldington in Haddenham, Buckinghamshire, and by Norwegian architect Wenche Selmer.

The white-painted brick-work of Stable Acre and its asymmetric fireplace are reminiscent of Aldington and Selmer, but the earlier houses have a warmth and approachability that is absent from Stable Acre – intentionally, I’m sure.

(If you liked this try ‘Rural Simplicity #2 – Hunsett Mill’)

This entry was posted in Architecture/Design and tagged Building Design, design/architecture, modernism. Bookmark the permalink.