So the vast majority of Norfolk is covered in brick-built houses with pan-tiled roofs, with plenty of surviving older timber-framed buildings, typically rendered over and painted – but that’s not the end of the story, of course.

To the west of Norfolk the land drops down to the Fens, and to the east, The Broads – both flat, peaty wetlands from where (until standardised mass-produced pan-tiles became the norm) Norfolk got most of its roofing material: reed for thatch. Norfolk reed was a very valuable commodity exported widely; barley straw from the county’s arable fields was also used. To the north and west, a broad band of chalk and flint lies close beneath the surface; flint is the most common wallinig material in this area, normally used as an infill between quoins, jambs and heads formed in more-expensive brick. In far north-Norfolk, west of the Holkham Estate, through the Burnhams (or as we locals call them, somewhat disparagingly, ‘Chelsea-on-Sea’), and round past Kings Lynn, there is a distinct zone of Carr stone, very localised and quite surprising when you come across it.

Brunskill’s ‘Vernacular Architecture: An Illustrated Handbook’ has a very good series of diagrams showing the distribution of various building materials across England. The ones below pick out (from left to right): (a) Render predominant as a cladding for timber-framed buildings in Norfolk, with weather-boarding being common only further south;  (b) Flint and cobble confined to the north and west of the county; (c) Pan-tile predominating in Norfolk and further up the eastern coast, with plain-tiles more common from Suffolk and farther south. 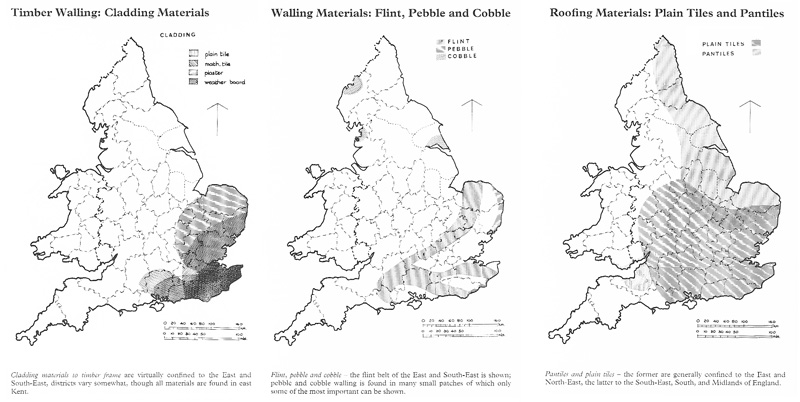 Many versions of these diagrams exist, by other authors, and though they vary in detail, they do reinforce the very localised predominance of vernacular construction materials – something that is easy to overlook when indulging in ‘regionally distinctive’ pastiche, of which the house-builders are so fond. I’ll come back to this later, but first, a bit on ‘high road’ buildings…