Before spending any serious time (and money) on constructing a financial and management model for a new Forest Village, we wanted to get an idea of the likely availability of suitable land. We had developed the following description of an ideal site:

We were looking for 150+ hectares of commercial softwood plantation, with gentle topography and predominantly sandy soil. Obtaining planning consent for such a project would be extremely challenging (to say the least!) so we wanted to make things as easy as we could for ourselves. We would target areas of high potential housing-growth, and whilst we wouldn’t avoid designated greenbelt we would rule out land covered by other blanket planning designations. And ideally the site would currently be closed to public access, so there would be no loss of recreational amenity for the public.

We had already had several meetings with the Forestry Commission about Forest Village, and at this first opportunity to actively support our work they were keen to do so. Savills Research were offered access to the FC land-holding database, to which they then applied a series of ‘sieves’, ruling out land step-by-step according to the constraints we imposed. Their first sieve was for sites of 150 hectares or larger which produced the following map: 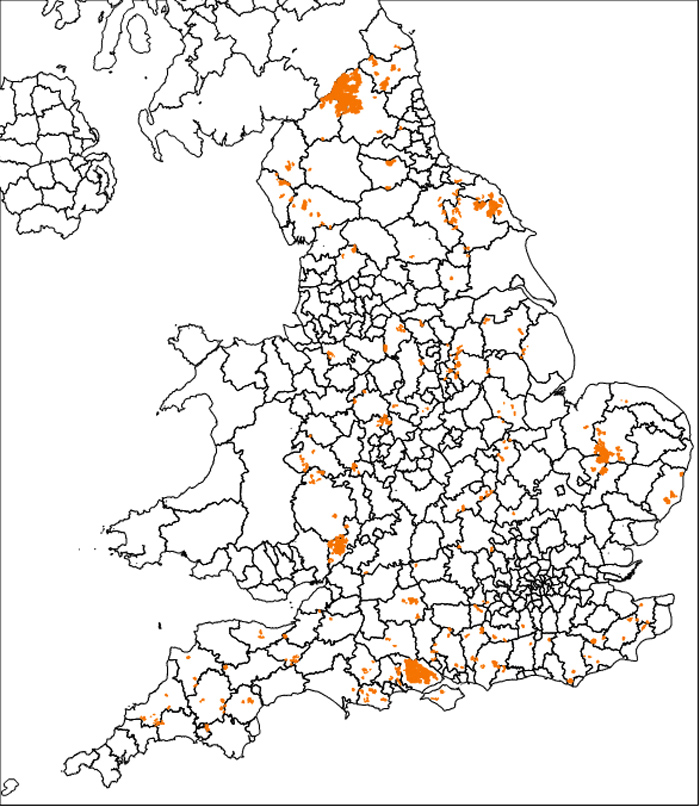 The major national forests stand out clearly – Kielder, Thetford and the New Forest – but looking nore closely at the map one could see that large blocks of forest peppered the map rather widely, including in the south-east. This was encouraging. Sieves were then applied one-by-one for the following planning-designations:
– National Parks
– Ancient Woodlands
– Sites of Special Scientific Interest
– Special Areas of Conservation
– Areas of Outstanding Natural Beauty
– World Heritage Sites

The effect on the map was dramatic: 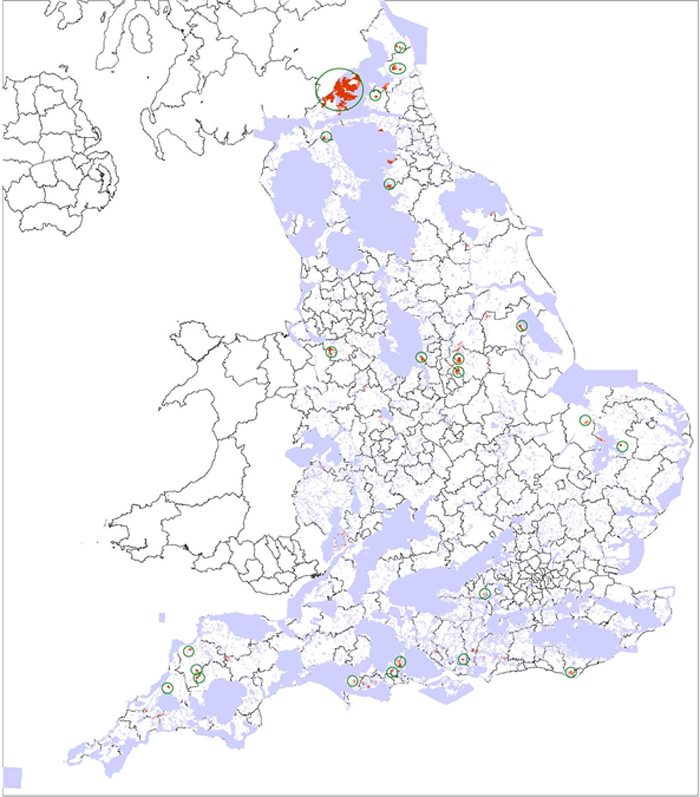 Apart from Kielder Forest in Northumberland almost all of our orange splodges have disappeared beneath a protective blanket of planning designations. I was surprised by the extent of these, and anyone who thinks England is in danger of being ‘concreted-over’ might find this reassuring (I’ve written about this previously on Ruralise). The next step was to take a closer look at southern England, to address the next of our search-criteria – that Forest Village would have most relevance in areas of high housing demand. Zooming in like this made it easier to pick out the remaining individual blocks of orange. Six of these caught our eye…