Tayler and Green #5 – A Thirty-Year Partnership

Towards the end of the war most district councils were planning major house-building programmes, but Loddon Rural District Council had begun to do so much earlier, under powers for slum-clearance granted by the by 1936 Housing Act, with the intention of tackling under-supply and dilapidation in its own stock of rural housing for agricultural workers. By 1939 land for 163 new homes had been acquired in Loddon, Gillingham, Hales and Bergh Apton, and tenders for the construction of the first 40 had been returned – but with outbreak of hostilities the programme was put on hold.

When the plans were revived in 1944, Loddon’s Housing Committee considered who should lead the design work. The council’s retained architect FJ Meen was kept on, mostly to carry out a programme of improvement work on existing stock, and approaches were made to two potential new architects: Norwich-based Stanley J Wearing (who declined to work on the project due to other commitments) and to Roberts Green and Richards of Lowestoft, now in the care of Tayler and Green. In February 1945 the Committee visited Tayler and Green’s Ministry-programme houses at Wrentham (see previous post), and a month later they appointed Tayler and Green to lead their post-war housing programme.

All good architecture needs a good client, and Tayler and Green certainly found one in Loddon RDC. From his earliest discussion with them David Green made it clear that if they were going to be asked to work rigidly with the Ministry of Health’s standard house plans, they were not interested – and Loddon accepted this. Tayler later reflected:

Loddon Council were always an excellent client in every respect, but particularly in this; that they never fussed over architectural matters, but stated their opinions freely then left it to us.

Over the next 30 years Tayler and Green designed and oversaw the construction of 687 houses, bungalows and flats for Loddon RDC – a body of work which received national acclaim in the form of five Festival of Britain Merit Awards, three Ministry of Housing Awards, two Civic Trust Awards and an RIBA Bronze Medal.

Next post: Tayler and Green #6 – From Semi to Terrace 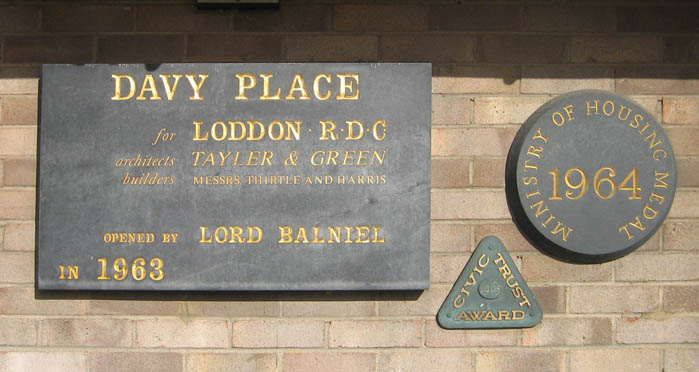