Following the discussion about Community Right to Build (CRTB) over the past weeks and months, it strikes me that it is still focused firmly on affordable housing. As I have suggested previously, the CRTB may make a modest contribution to the affordable housing problem, but providing affordable homes for local people isn’t the only purpose to which the CRTB could be put.  In the information published by the government so far it is explicit that a wide variety of other uses, including open-market housing, will be allowed. In my post ‘How to CRTB #2 – Creating Value’ I outlined how re-classifying a piece of farmland as development land massively increases its value, and it is this value-uplift that could actually be the most interesting and productive aspect of the Community Right to Build. I thought it might be interesting to try to quantify this, so with the help of Alan Cole at Savills Norwich I’ve imagined a hypothetical CRTB project and put some numbers to it.

This exercise is based on a hypothetical site of around 1.1 hectares (2.7 acres) in a village in south-Norfolk. I have imagined that the village has a project it wants to fund – the purchase of the local pub or shop, refurbishment of the village hall, or a new cricket pitch or playground – and has hit on the idea of building some houses for sale on a piece of land that has become available, to generate some cash. 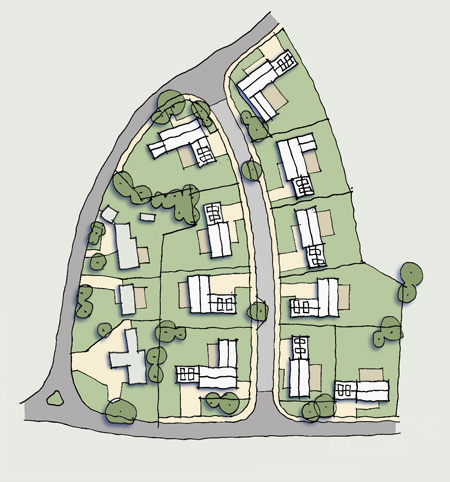 The site would take ten large houses, on fairly generous plots (see right), giving an overall gross development density of 9 dwellings per hectare – unusually low by current ‘best practice’, but appropriate for its village setting. The houses are large family homes, each around 250 square metres, detached, with double garages – rather ‘off-message’ in terms of sustainable development, but let’s go with it. The houses are worth £500,000 each on the open market, giving a total sales value of £5m. Assuming a fairly lean construction cost of £1,100 per square metre they will cost £2.75m to build. Road works, construction contingency and statutory consents add another £130k, giving a gross construction cost of just under £2.9m. To this have to be added further development costs – design team fees (£345k), marketing costs (£10k), agents’ fees (£85k), finance costs (interest on borrowed money at say 7% ; £130k) – giving total development costs of £3.45m. Subtracting these development costs from the sales value of £5m leaves a gross margin of £1.55m. Out of this ‘pot’, a developer would have to buy the site and have some money left over – his profit on the development – to make it all worthwhile. Putting in a target profit margin of 20% on cost would give a profit of £835k leaving £715k to buy the land. After deducting the payable Stamp Duty (3%) and legal costs, the ‘residual value’ of the land (total sales value minus total costs and developer’s profit) would be around £695,000.

Two numbers there are of particular interest; firstly the profit on the development of our ten houses. It sounds like a massive sum of money – £835,000 – but out of this profit from the development, the developer, just like any other business, would have to pay for his own staff costs (for finding the site and managing the design and construction process), for his business overheads (his office, equipment, etc) and also the cost of all the other potential acquisitions he has pursued which, for one reason or another, came to nothing. Unless the expertise for carrying out a project like the one we’ve imagined existed within the CRTB project team, they would have to either partner with a developer or buy in the expertise in the form of a project/development manager of some sort. A local, family-run builder/developer might perhaps be persuaded into helping the project on a ‘non-profit’ basis, which would free up some of the development profit for the good cause. Assuming the developer’s business reckoned on making 20% profit on turn-over (I don’t know how realistic that sounds), he could keep 80% of the £835k to cover his costs and put the other 20% (£167,000) into the CRTB project ‘pot’ – a significant sum, but arguably a fairly modest reward for quite a lot of effort for the CRTB team. (The alternative would be to hire-in a project manager to act for the CRTB project. It would be cheaper, but also a bigger responsibility).

The second interesting figure in our example is the land value: £695,000 for 1.1 hectares of ploughed field, and it is in this fertile patch of loamy earth that the real value lies. As farm-land immediately adjacent to a village it is probably worth around £10,000 per acre (£24,700 per hectare), but our hypothetical example has valued it at £255,000/acre (£633,000/ha)! A typical arrangement between developer and agricultural land-owner might involve the developer agreeing to buy the land at its agricultural value then splitting any up-lift in value created by securing a planning consent – the ‘overage’ – 50:50 with the land-owner. The landowner might therefore reasonably expect to receive £350,000 from his deal with the developer if they could get planning consent to develop the land, rather than plough it.

The catch is, they probably can’t get that consent. As I’ve previously explained, the planning system would currently only allow this land, just outside the development boundary of the village, to be used for affordable housing under a Rural Exceptions policy. My sketch of the same piece of land used for affordable housing (see right) suggests it might accommodate 18 more modest semi-detached homes, and sold to a housing association it would be worth only £8–10,000 per plot, a total of £180k, let’s say. Realizing the difference between a land value of £180k (affordable housing) and £695k (open-market housing) would previously have been in the gift of the planners and developers; under CRTB it is in the gift of the local community – if 75% of them agree the project is a good idea.

Of course it is conceivable that a community-minded landowner might give the land to the village for nothing, in which case the entire £695k would be available to the good cause, on top of whatever ‘favour’ the developer could be encouraged to make. And a more commercially minded land-owner might seriously consider an offer of say £300k for the land, being considerably in excess of its value under affordable housing, its only other realistic prospect of development; this would still leave the CRTB project £395k to the good. With a bigger scheme (the 10% limit would actually allow twenty houses in the village in our example) this ‘pot’ would be even bigger, and a war-chest of around half a million would no doubt attract further funding, depending on the nature of the good cause – from the National Lottery, for instance.

The numbers in this example are realistic but only approximate, obviously. We have tried here only to illustrate the sort of amounts of money that could be released under The Community Right to Build, if it is thought of as being about much more than affordable housing.

Next post: What Would You do With Half a Million Quid?